Goldman Aerospace Alien intrusion is one of the six mods in Modding Space. It was the 4th mod to be added. 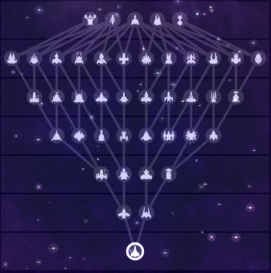 About the Mod[edit | edit source]

The main difference between this mod and other modding space mods is that instead of a chaotic arrangement of players, the players are focused in the area in and around the alien city. The city looks like many cubes of different size with a floor in the background. Cubes are stationary, deal damage in a collision, and allow for new combat strategies. The center of the city is located at the middle of the map directly above the star. In the 5.0 update the center was made far larger which resulted in a much wider distribution of players in the map. For convenience, the city is shown on the radar.

Asteroids are common but there is no benefit in destroying them; the player receives Score for destroying them but not any gems or secondaries. This effectively forces players to kill the aliens if the want to progress. Asteroids can be used as choke points for either the aliens or the ships on the other team.

The presence of this feature contributes to the fact that the teams stay in tight groups and often do not attack each other. This is because the city is inhabited by aliens, which in parallel with you becomes stronger. In the beginning, the aliens attack in groups, and it is difficult to escape from them and survive without staying in a group, despite the high speed of low-level ships. However, the first aliens deal little damage, so the greater danger is not the aliens, but the cubes. In the middle stage, there is a variety of alien species. When the ships upgrade to the highest tiers there are Yellow Saucers. (Red in ACW events using Intrusion.) They are quite dangerous so it is recommended to kill them in groups (3+ teammates). However, a skilled player in a fast ship can kill them alone (takes a while due to their massive health pool). When a team fills their level 4 base and obtains Tier 7 ships, it is little use for them to get crystals in the city other than to fill their cargo. The team just goes to destroy the enemy base to win the game.

Healing Lasers- This is a new mechanic added to team mode that changed the way many people played the game! This update made more people think more tactically. This update leads to many players helping teammates by healing them. To heal you need to go to the station depot and click on the option where it says "Healing" when this is done your lasers turn into much more of a fun and laser which shows "+" when you heal a player. The amount the player gets healed by is determined by your ship and its stats. The game mechanic allows players to act more as a group and stops the problem with people flying solo and killing the whole team. This is very useful in this mod since players often die to the aliens in the city without a healer. Healing gives points in team mode thanks to the October 2019 update. Also the best healer is recognized in a team. The best miner and the best killer will also be recognized.

Gem-Transfer- This is a new mechanic added to team mode that allows players to drop gems for other teammates! This update furthermore allowed players to think as one and to play as one as there is no "I" in TEAM! This mechanic is done by holding "V" which allows you to drop gems by the amount you need to upgrade each stat such as a t3 can only drop 15 gems while a t6 can drop 30 gems! This is a very good strategy in team mode as you can help teammates that need gems so they can upgrade get gems and help your team get ready for danger and be prepared for opponents. This mechanic added more thought into the games and more fun things to do.

In addition to the city, another feature of the game is its ship tree with its large variety of ships. It includes 42 ships, according to the scheme of 1-2-4-8-10-12-5. In the tree, there are pronounced classes of ships. The higher the level, the greater the difference between the right and left side. Let's take level 6 as an example. On the left edge - sniper ships with great firepower but quite poor defense, to the left from the center - fast quick-firing fighters. On the right at the center - powerful, but vulnerable attacking ships, on the right at the edge - powerful, but clumsy defensive ships.

Many beginners have problems with playing especially in the first versions of the mod because it was imbalanced. But now you just need to stick to some rules: - Enter only on a fresh server, it is this mod, where the most affected on game this factor. Otherwise you need to wander between asteroids, in search of trapped aliens, i.e. stuck between asteroids - If you are on Hammer/Squid, then do not make jerks in the center of the map, or do, but very carefully - If you are in the city and there is a teammate in the narrow corridor, no need to push them - No need to try to get/find a crystal when you have no shields, or crystal went to the outside of the cube, no matter how big it was - There's no need to take the risks. You have to remember the closer you are to the star the less chance of survival. You can stay on the borders of the city, or take advantage of the point your camping at, Following these rules, you can easily play this mod. The best way to win this mod is to not attack until the enemy engages in attacking and just focus on mining, the best thing to invest gems in is attack pods. They are very beneficial in killing surrounding aliens which increases your mining rate which is needed to win this mode. Defence pods, mines and missiles are helpful as well. Defence pods for allowing you to take more shots (only really good when your on the outside, in the center they don't work as well due to the high alien count there). Mines to quickly blow up aliens as they spawn and to blow up your enemy(s) that get pushed or fly to the center. Missiles to help damage/kill groups of aliens. Rockets and mining pods are just about useless. Rockets due to low damage and mining pods due to the lack of mining.

In the mod there appears to be GA(Goldman Aerospace) bases and ships in the background. You can not interact with them; they are only for decoration.