Crusader is a Tier 4 ship in Starblast.io. It fires two parallel shots from the nose of the ship that deals a moderate amount of damage. It has the highest shield capacity in its tier and is tied with the Pioneer in terms of shield regeneration. It can thus farm asteroids very proficiently by simultaneously ramming and firing. 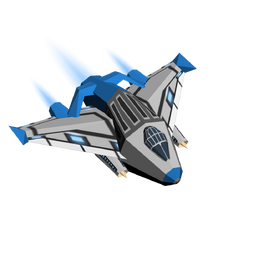 The Crusader, for much of its history, was known as one of the most under-powered ships in the game, though in spite of recent updates it has been made into a fairly formidable ship. The Crusader is an all-around decent ship with a moderate amount of agility. As is the case with most ships, upgrading energy and shield regeneration first is generally the best approach, whether planning on attacking or defending. Because of its large size and relatively high mass, the player will generally fare well in combat as long as the opponent is constantly being rammed. While this ship is relatively competent when fighting, it still makes for a prime target with an enormous ship model. Unless the Crusader can ram the opponent against an asteroid, it will usually lose in a 1v1 duel. Though it still won't fair to well against most ships on level 4, it can kill lower levels relativity well.

The Crusader performs very well in Team Mode when paired with a ship that deals a large amount of damage, such as the X-Warrior. With the large shield pool of the crusader and a heavy hitter attacking from behind, it makes for a wonderful combo.

Since this ship has such strong shields and a somewhat lackluster amount of damage, it will generally benefit more from attack pods than it would from defense pods. While not usually known for its combat proficiency, the Crusader becomes a force to be reckoned with when paired with an arsenal of secondaries. Be careful about ships with higher mass than you though, especially bat-Defenders, and even Pioneers can push you around. It is best to upgrade to the Bat-defender (if you are going for a "tanky ship" play style) as soon as possible, even if your crusader is maxed, as Bat-defender is able to do everything that Crusader can do, but better.