Delta-Fighter is a Tier 2 ship in Starblast.io. This ship fires three lasers from the nose of the ship which diverges at a spread of 30 degrees. Due to this spread, the Delta-Fighter is much more effective when fighting in close quarters. 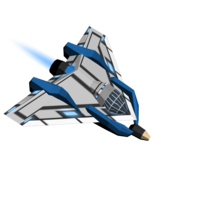 Without any upgrades, the Delta-Fighter is not a strong ship with exceptionally low shields and mass. It has a moderate damage output and thus can be used as a combat vessel in a pinch, though that is usually inadvisable. It is recommended that you upgrade energy regeneration fully, and then farm asteroids until your cargo has been filled so you can upgrade to a tier 3 ship. While slow initially, when the Delta-Fighter is fully upgraded it is relatively quick and agile. This agility advantage paired with a sneak attack can allow the Delta-Fighter to kill some freshly upgraded tier 3 ships if used adeptly.

Compared to the Trident, the Delta-Fighter is faster and more agile, though the shields and shield regeneration are both much lower. However, due to its close-range burst damage, Delta-Fighter would generally win in a duel. The energy regen and agility also allow the Delta-Fighter to perform relatively well as a source of supplemental damage to a larger ship.

Unlike the Trident, the Delta-Fighter becomes a somewhat formidable ship when paired with two defense pods since it can put out a decent amount of damage. While this is possible, however, it is not recommended as one slip up could potentially prove fatal and would essentially be gifting your opponent two free pods.