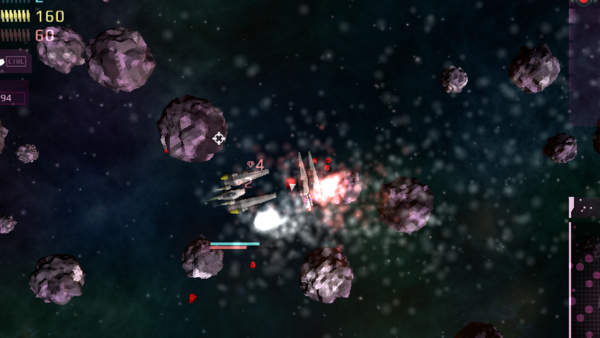 Duels are fair battles between two players usually fought in custom servers. These are generally fought in the same ships, or ships of the same tier, but can also be fought with different tier ships. Duels are generally fought with full shields and full crystals. It is also usually fought with maxed out upgrades and no secondary weapons. Duels are much harder now because of a recent update where you can't pick up gems when your gem capacity is full. Also Bouncing lasers also make duels hard because if a ship flys by the lasers will bounce off of them and deal extra damage to your opponent or you (if it was your opponent's bullets).

Duels are usually fought on custom servers. It is preferable to find a server that is not too open nor too dense. It is also preferable to make the asteroids yield extra gems so that both players can get to their ships quickly. Also, set it so that all ships start out maxed so that players do not have to spend time upgrading. Some ships are better for dueling than others. For example, a U-Sniper is an excellent ship for dueling, whereas the Aries is not, because it cannot dodge at all. Other than yielding extra gems and ships starting out maxed, all settings should be set to their default settings other than the speed which should remain at 1.2x if the duel is to be similar to team mode, as team mode has the ship speed setting to 1.2x. To start a duel both competitors should ask "Attack" "Hmm?," and if the opposing player agrees by saying "Yes" both players will accelerate in different directions from each other for a 5-10 seconds. Then they will come back to the center where they are free to attack! Good Luck in your duels!

These are general rules and instructions for starting a fair duel and being fair:

Duels have many different aspects of strategy to utilize. The base principle is that the player that gets hit less, hits the other more, and collects more Crystals will win, given equal ships. There are many different strategies to win duels.

When starting a duel, it is preferable to find a choke point to be able to get the first shot and knock them into asteroids. A choke point is anywhere where they will be forced to go through a small opening, giving you an increased chance to hit them.

When dueling, there are many ways to dodge an opponent's pulse. You can turn off RCS to drift away, being able to dodge them while still shooting at them. To do this, fly in a direction away from your opponent and clear of asteroids, and turn off RCS. There is also the simple tactic of just flying around them. Another tactic, though difficult to master, is spinning. You can also hide behind asteroids, along as they are not insta kill (which they are normally in dueling servers.

When dueling, hitting someone with pulses is important, but it is also important to ram them. Ramming can make your opponent miss, and if you corner them, you are almost certain to win the duel. If you ram your opponent into asteroids, they will take damage and possibly spin around. This gives you free shots at your opponent and gives you the advantage.

Late in a duel, one or both of the duelist may start to lose gems. It is incredibly important to pick up these gems, as picking them enables you to take more hits and also keeps your opponent from being able to do so. Gems are also the only way to gain health faster than your opponent.

A very important strategy when dueling is avoiding the bullets. To accomplish this many duelists spin and curve in awkward directions to disable opposing players from hitting them, the best ship to use this strategy on is the A-Speedster, Marauder and other fast and agile ships. A duel can come down to whoever hits their shots accurately and baiting and tricking people into shooting and dodging the bullet will help you prosper in the duel, and may lead you to victory!