FuryStar is a Tier 5 ship in Starblast.io. This was the second instance of a ship design/idea being pulled from the community and implemented into the game. The FuryStar fires a total of four lasers from the front of the ship. The two central lasers, while dealing with the vast majority of the damage and having a relatively high velocity, are not considered pulses. If the player continues to fire when low on energy, the two outer lasers will continuously fire with the inner main lasers alternating. Because of the firepower used by the outer lasers, it is highly recommended that the player manually fires the pulses rather than holding the fire button down. This ship sports the highest acceleration and rotation of any ship currently in the game. However, it is slightly lacking in speed but it's tied with the speed of the Aetos. 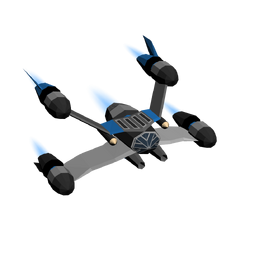 The FuryStar makes a good route to the Scorpion or the Marauder. It is recommended to upgrade energy regeneration first, as is the case with the majority of ships. Due to the incredibly high base agility, there isn't much value in upgrading the agility of the ship before maxing everything else first. While not the fastest ship by a large margin, its incredible acceleration can make for easy escapes and devastating hit-and-run attacks. Its unmatched agility can also give pursuit and crush enemies through the densest asteroid fields, hence, it is recommended to drive enemies towards them. It must be noted that the FuryStar cannot withstand much punishment, due to the low mass and moderately low shields, making it work incredibly well with Defense Pods. But the highly skilled can take down the level 7s (other than Bastion) because of superior agility and the unique firing system found on this ship. With attack pods, this ship becomes EXTREMELY deadly.

The FuryStar is directly inspired by Babylon 5's Starfury, its appearance matching significantly.