The G-Sniper is a Tier 6 ship in the KEST mod and is a stronger, Tier 6 version of the H-Sniper. It has one frontal cannon that very rapidly fires low damage shots at a very high velocity. While it has very low mass for a Tier 6 it compensates for that with its small size and good agility. The G-Sniper's high energy capacity allows it to deal with high burst damage. It is not recommended to fight alone with this ship as its low shields will cause it to be destroyed quickly. But when behind friendly ships, the G-Sniper can be shielded while dealing high amounts of damage. 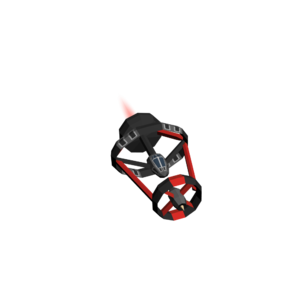 NOTE: The maximum firing rate of cannons was capped for all ships to reduce lag in mods. The G-Sniper's fast-firing cannon is affected by this. In real games, it shoots slower than originally intended but has higher damage to compensate.