The Heartbreaker is Tier-7 ship in the U-Series mod, and upgrades from the U-Barricade, U-Monitor, U-Perimeter, and the U-Bruiser. This ship is a redesign and rework of an older ship, the Andromeda. It utilizes medium-high power cannons all across its circular body to shower a heart-shaped pattern of bullets around it. The Heartbreaker is the fastest turning Tier-7 in the mod.

NOTE: As of version 4.0, some information may be missing or outdated. 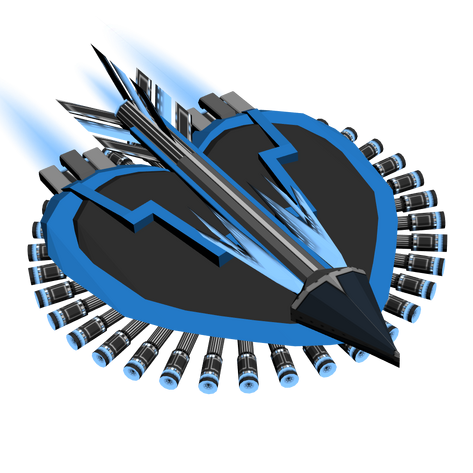 The Heartbreaker can be seen as the final ship in the "Miner" ship series, having cannons facing all directions, extreme energy regeneration, and a heavy shield capacity, however, it differs from other miner ships as upgrading from U-Perimeter decreases the shield capacity and mass slightly, instead of increasing it. This can prove to be troublesome, as the ship is far more vulnerable to long-ranged attacks, and can be more easily thrown around vie ramming, especially from the assaults of a U-Smasher.

Rather than continuously empty firing, the Heartbreaker is designed to attack in bursts, saving up enough energy in its massive bank to fire a complete circle of shots. Failing to do so will result in losing control of the ship; every individual laser has strong recoil, and empty firing forces every cannon to shoot one by one. Firing in bursts ensures that every cannon's recoil is canceled by that of another cannon, allowing the user to maintain control of the ship.

When mining, it's best to get fire at a dense group of asteroids while facing away from them, as the rear end lasers fly out farther, and with greater density. In combat, it is best to attempt to get close to your adversary, either by surprise attacks or by the use of large asteroids for cover. Face away from your opponent at the last second to ensure that they suffer more laser damage. A single close-ranged attack can send most enemies flying away a good distance with mostly depleted shields, and a second burst after approach will likely finish them off.

Be wary, however, as approaching enemies without getting killed first is the true problem. Upon seeing you, most people will retreat to an area that they can use to their advantage, or to a large group. The slow speed of the ship prevent chasing from being effective. Because of this, the Heartbreaker is best used with healing lasers during raids. Because the lasers are best used in close quarters, situating yourself in the middle of a group of allies is a perfect way of ensuring that they stay alive.

Overall, the Heartbreaker shares similarities with other ships of its kind but lacks the fundamental elements that said ships possess. It is best used with healing lasers to support your allies during base defense or raids.

For brevity, the second table is repeated 18 times but not shown here.