Deathmatch is a game mode that was released on 23rd May 2017. Deathmatch is a competitive mode in which players compete to get the most kills while preventing enemies from getting kills and avoiding deaths. Players can choose one from one, two, or three random ship(s) from the same tier, level depending. 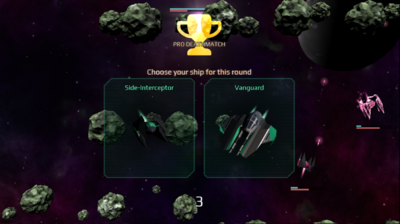 All Deathmatch games begin with the player spawning in at a random location on the map with a fully upgraded ships, and with half the ship's gem capacity filled up to a cap of 200. (Ships level 4 and lower have 50% of their gem cargo filled). Each ship has an infinite number of lives each round which means that it is impossible to downgrade. Asteroids in deathmatch mode has a much larger amount of health and yield no gems. As such, it is only possible to obtain more gems by fighting other ships and causing them to drop their gems. Due to these mechanics, mining asteroids is a pointless task. Only a fraction of the gem lost by each player upon taking damage will actually drop, making gems still scarce even though each respawn brings you back to the starting gem level. However, deaths do not necessarily matter due to the infinite lives each player possesses. It is a unique stratagem to commit suicide on asteroids when near death than to let another player have a kill and potentially win.

Deathmatch features a unique target mechanic,target will be the one who killled your old target(if without old target or old target is not dead,it will be randomly assigned.). Killing these targets yields a reward of two points, as opposed to the standard one point given for a non-target kill. It is, thus, advisable to focus solely on killing your assigned target or anyone chasing you, to prevent them from getting two additional points. It is also a good strategy to target heavily damaged ships, even if they aren't your target as you can often get the kill while taking little damage. The player who gets 12 points first is the winner of the round. The targeted player changes after a certain amount of time, or if they are killed.

All ship names and colors are anonymous in deathmatch except for your own and all leaderboard/revenge markers are disabled. The lack of any indicators as to who is in place to help prevent teaming between players, which would provide a very large advantage. The first incarnation of this game mode featured a limited chat system, though this was later removed entirely to reduce said teaming. Map sizes are very small, and they often have a rather high density of asteroids. Using choke points to lure enemy ships in and destroying them can be an effective strategy. Upon respawning, ships are invulnerable for a very short amount of time in comparison to most other game modes.

Kill-stealing is also present in Deathmatch. Previously the player who got the last shot on a ship was rewarded the kill. However, the kill system was changed so that the game chooses who gets the kill depending on who dealt the most damage in the final moments to reduce randomness with bullet spam ships. It is recommended to focus on weaker ships before attacking stronger ones with full shields, as the only goal is to win. Barracuda-only rounds have been removed entirely featuring that ship could last for an incredibly long time in comparison to other ships. There are still rounds with the Barracuda and the best counter is to get the ship with bullets and RCS away from the ship. (Any bullet based ship will do even the H-mercury) You just have to be careful to not get in front of an asteroid for long or you will take insane damage when a high mass ship comes and rams you. It is still usually not recommended to choose the Barracuda over other ships due to unpredictable map patterns.

Deathmatch games are by far the shortest of any other mode and are typically is a very fast-paced and competitive mode. Players can utilize this mode to effectively train with specific ships with little commitment or punishment for dying.

Also,for some reason, Aries and Odyssey are not available ships in deathmatch. 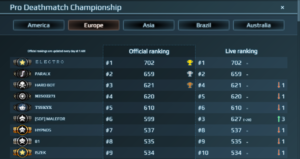 Pro Deathmatch Championship rankings in Europe as of 21-Jun-2017.

The Pro Deathmatch Championship is a unique feature for ECP players. It ranks ECP players in different regions with an Elo-rating system. Winning matches in Deathmatch results in increased points and ranking while losing matches decreases the player's score/ranking. The points gained or lost by a player depends on the points of the other players inside the match. Winning against a much higher-ranked opponent will lead to gaining many more points, and the opponent losing many more points than winning against a similarly ranked player. Winning and losing against non-ECP players also seem to work differently. Winning against a non-ECP gives you a few points but likewise, losing to one doesn't make you lose many points.

If a player joins a Deathmatch round after it has already started, the round will not count towards the player's points as it would not be fair to take away points for joining late and losing. Non-ECP players also do not participate in the rankings. Leaving the round after the initial ship countdown has finished (and thus a random ship has been chosen for the player) affects the rankings and counts as a loss, and ranking points are lost. Leaving before the countdown has finished or in the round results screen does not affect the rankings. You will also not lose points for joining in the middle of a round and then leaving before the round is over.

Rankings are updated every day at 22:00 / 10 PM UTC. Official rankings indicate the updated rankings for the day, while Live rankings indicate the rankings at the exact time one is looking, and the changes in the ranks potentially due the next day. Points decay over time, making it easier for players to take the top spots in the leaderboard and to force the players with the highest points to constantly play Deathmatch to maintain their position. The higher your rank on the leaderboard, the faster your points decay. Point decay occurs randomly and it is not always guaranteed for a player, in some days a player may lose points and in other days they may not. 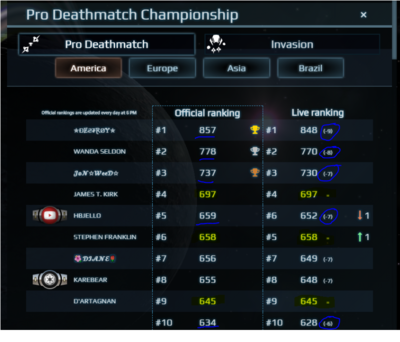