The Pulse-Fighter is a Tier 3 ship in Starblast.io. It shoots one large pulse from the nose of the ship at a frequency of once per second, and two weaker lasers from its sides at 3 times per second. The Pulse-Fighter has good accuracy and so performs very well at any range. 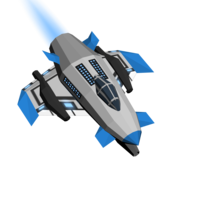 This ship is one of the most versatile ships in the entire game. The frontal cannons and moderate energy regeneration make this ship perform relatively well when mining. But this ship truly shines in its combative abilities. When fully upgraded, is a deadly fighter, with very balanced statistics overall. It has a very effective set of cannons, good speed/agility, a healthy shield capacity and good regeneration rate. As such, it is a match for ships up to Tier 5 and can even kill un-upgraded Tier 6 ships when piloted well. It is not unheard of for a Pulse-Fighter to destroy an Odyssey or Aries. In a direct duel between a Pulse-Fighter and nearly any other tier 3 ship, the Pulse-Fighter will usually end up on top.

Because of this ship's impressive abilities, teams of pulse fighters can prove incredibly hard to counter. When facing off against any other ship, and utilizing RCS, it will usually prove incredibly effective. In the case that a Pulse-Fighter starts to get low on shields, the very high speed allows it to flee combat with very few ships being able to pursue it. A relatively lightship with moderate firepower, this ship is best seen as a tier 3 version of the Condor (although the official tier 6 version of this ship is the Advanced Fighter).

The Pulse-Fighter performs incredibly well with a full set of defense pods. This set up can prove dangerous for nearly any other tier ship. When facing off against a skilled player with a Pulse-Fighter, a good strategy is to lure them into a dense asteroid field and ram them. The Pulse-Fighter is susceptible to being rammed, as it has a fairly low mass.