As part of the Unified Community Platform project, your wiki will be migrated to the new platform in the next few weeks. Read more here.

The Pulse-Warrior is a Tier 7 ship in the KEST mod. It could be considered a Tier 7 version of the Gnat/Fly because of its similar size, similar mass, speed, agility and shot style. It has the lowest shield, lowest firepower and has by far the lowest mass of all Tier 7 ships in the mod. It's the lightest ship in the entire mod, being lighter than the 2 tier 1 ships. However, to compensate for this the Pulse-Warrior is very small, fast and agile, making it very difficult to hit. This ship has two frontal cannons stacked on top of each other. One shoots a high damage main pulse while the other rapidly fires slightly inaccurate low damage shots. It is recommended to only shoot when the main pulse is ready. Since the Pulse-Warrior has such low shield capacity, it is not recommended to fight with this ship before getting tons of gems in the cargo. When fighting with this ship turning RCS off helps you dodge most shots. All combat strategies that work with the A-Speedster also work with this ship, given their numerous similarities. When using this ship AVOID torpedoes at all cost, as if you get hit you will go flying very far VERY fast, likely getting killed after colliding with an asteroid/base/another ship. 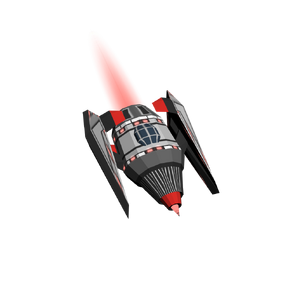 NOTE: The maximum firing rate of cannons was capped for all ships to reduce lag in mods. The Pulse Warrior's fast-firing cannon is affected by this. In real games, it shoots slower than originally intended but has higher damage to compensate.