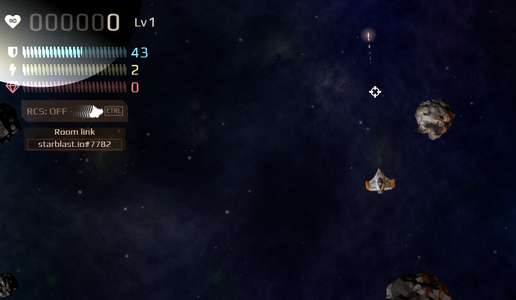 RCS (Reaction Control Systems) is a feature in Starblast.io. When toggled on, the ship automatically brakes when not accelerating, and when toggled off, the ship continues moving in the direction accelerated without stopping, thus, it is possible to accelerate in a direction, turn around, and fire while moving backwards, in a controlled retreat that doesn't leave the ship completely vulnerable. It is toggled on or off by Ctrl, no matter what OS is being used..

RCS is a game-changing feature for smaller, faster ships such as the Side-Interceptor or the Shadow X-2 and for ships with recoil, such as the U-Sniper or Y-Defender. Smaller ships can move around stronger, slower ships and continue firing while simultaneously moving, making them hard to target, while ships with recoil can beat a hasty retreat (and/or offensive) while continuing to fire when necessary. A skilled player can use RCS to achieve victory against dismal odds, and teams can be shattered using the feature. It is not recommended to leave it on or off for long periods of time, but to switch constantly as need arises for the optimum efficiency. However, one must be careful with RCS. Be aware of your surroundings, especially in Deathmatch, where asteroids are more deadly. If you are using RCS to move directly away from someone, it means you can hit them, but it also may be easier to hit you, as you are going straight and no longer dodging around.

RCS also depends on Friction. In default games, the Friction is at 1x, but in Custom Games, this can be changed. At normal friction, ships will decelerate to their maximum speed if exceeded (using recoil), however, this will not happen at zero friction, making gimmicks such as hyperspeed possible.