This is the 3rd mod added to Modding space, it consists of 2 rounds per game (qualifying which is where you race for the fastest lap which will help when you start, and the actual race which consists of 4 laps and you have to be the fastest to win) there are secondaries that spawn in randomly in the racing path (no pods or Torpedoes) and energy capsules (the ships have zero energy regeneration). There are 5 different tracks in this mod which 3 are designed by the developers. The other 2 designed by Goldman. The ships slightly vary by mass, ship speed, agility, acceleration, and dash speed. This was the last mod featured before modding space was officially released. It was replaced by Starblast racing championship in modding space on June 19th 2020. 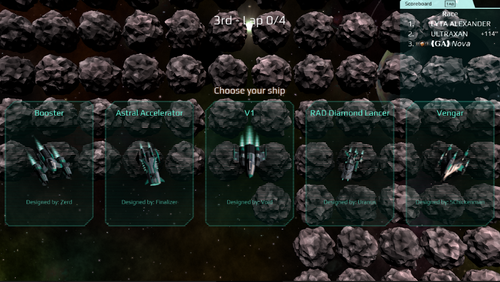 All of these ships still exist in game because they are in use in Starblast racing championship.