What is the Starblast racing championship?[edit | edit source]

SRC - version of racing for experienced players, with a focus on accuracy, lack of randomness, racing rules, with real tracks, and of course.. with UPDATES!

Season 3 will be held here: https://discord.gg/TQM7H7T

Details about the mod[edit | edit source]

Development of the mod began in August 2019, when the first season began. It lasted until the end of the year, Omega became the first champion, and in December the first release of the mod in the form of an all-game event was made. At the beginning of 2020, the 2nd open season was held with 2 classifications - in Europe and America. In Europe, the champion became Acar, in America - XyCrosier. The 3rd season will be held in the summer, and it will become a closed league with registration in advance, it is open until June. But you can register as a reserve pilot even during the season. The mod was officially released, replacing the original racing mod on June 19th, 2020.

The creators are Goldman and Notus. Codes of all mods you can find on the repository dedicated to SRC: https://github.com/mrGoldmanus/SRC-All-track-codes-

Boosters are located in special zones, everyone can use them.

Starting boost was removed from ships, and a lot of work has been done to balance the boosters

The server uses auto-detection of afk players and trolls, as well as manual moderation.

Wide, complex tracks, the number of tracks exceeds 10, all are prototypes of real ones. Balanced ships, a lot of work has been done to try to make the race more convenient. Added 2 new ships. Added the ability to change the ship during qualification

Added a lot of features, such as the outlap detection system (finds a ship stuck in asteroids, and throws it back), spectator mode, leaderboards, and much more

Format of the championship[edit | edit source] 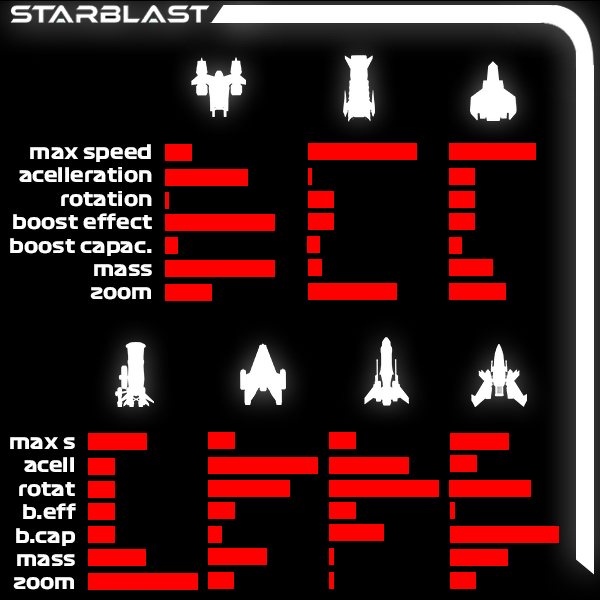 SRC ships have different characteristics than average Starblast ships. All characteristics affect movement, rather than shooting, or health. No shield capacity or regen can be lost or gained, and there are no gems to be collected. Instead, all the ships have starting statistics that can not be changed(seen to the right). If one wants a different racing experience, they must switch ships by pressing "e" in the spawn area.

Max Speed: Very similar to speed in Upgrades, this is just how fast the ship can move while moving forward.

Acceleration: How quickly the ship can go from slower speeds to higher ones. Ships are slowed down by turning, asteroid or player impacts, or not moving forward.

Rotation: How quickly the ship can rotate.

Boost Effect: The boost is similar to the Barracuda. Boost effect is how effective the boost is, ie. how far a single boost moves the ship.

Boost Capacity: This is the same as energy capacity, and allows the ship to boost more often. Boosting costs around 60-70 energy, and canisters give 100 energy. Click "Alt" to use canisters.

Zoom: The higher the zoom value, the worse the FOV.