The Vanguard is a Sniper-Class T4 Ship. It fires two high power lasers from the front with powerful recoil and a moderate rate of fire. The Vanguard is the largest of all T4 ships. Although it has an impressive attack, it has poor shields and is quite slow. It is, nonetheless, a wonderful ship once upgraded. This ship lacks a strong shield, energy regeneration, acceleration, and ship speed. But the energy capacity, laser damage/speed, and the turn speed are amazing. It has an average mass of 200 and closely resembles an ETA-2 Starfighter. 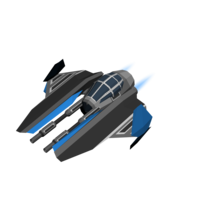 Due to its recoil, upgrading all but damage is useful initially. It is a decent miner due to the high damage (although its immense recoil along with poor acceleration makes it difficult to collect the crystals), but is very slow compared to other T4 ships. Since it has relatively low shields, it benefits more from defense pods than attack pods. Since it has the highest damage per shot of its tier it is effective against lower tier ships, killing them in only a few shots.

Although this ship is extremely slow, it can move quickly by using its extreme recoil to its advantage (although it does go backward). The recoil exhibited by the ship was even more extreme then the U-Sniper, and the well-timed shots can allow it to retreat very quickly. It is one of the best at using RCS to retreat in the entire game, and it is good at quick duels in Asteroid fields. The Vanguard is the most agile level 4 ship in the game with its maxed agility equivalent to that of an unupgraded FuryStar.

This is a very popular ship as it is easy to get to through the powerful, fast mining Pulse-Fighter. When a group of these ships in team mode attacks, it usually completely rips apart the other team. The Vanguard upgrades to U-Sniper, one of the worst or best (depending on how it is played/upgraded) tier 5 ships, or the FuryStar, which has mediocre stats but is the most agile ship in the game.