Y-Defender is a Tier 3 ship in Starblast.io. It fires a relatively large pulse from the nose of the ship that deals a high amount of damage with slight recoil. Because of it's high damage the Y-defender can only fire one shot at a time while unupgraded. When maxed, the Y-Defender is capable of firing two shots with a one-second delay between them. 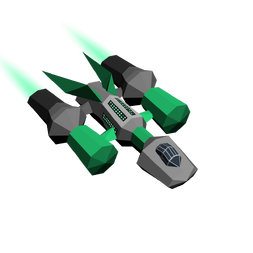 Following the pattern present with all defender class ships, the Y-Defender is fairly slow for its tier and lacking in agility, but has a respectable energy regeneration, great shields, and a high mass for its tier. It can stand toe-to-toe with any other tier 3 ship and will usually fare well when dueling against any tier 4 ships as long as the player uses the ship well.

It is recommended to upgrade energy regeneration first when playing with this ship, followed shortly after with shield regeneration. The Y-Defender's high mass, shields, and energy allow for incredibly fast mining for its tier despite the recoil, and in a moderately dense asteroid field will usually be able to fully upgrade everything in a matter of minutes. It is highly recommended to exhibit caution when fighting a Y-Defender at any tier as a fully upgraded Y-Defender can prove a serious threat to most ships. While a fully upgraded Y-Defender is very effective, a Y-Defender without damage upgraded can be especially deadly, due to the rapid-fire rate.

Its low maneuverability, however, is its main weakness. Fast and agile ships such as the Shadow X-1 or the Pulse Fighter can defeat the Y-Defender by means of hit-and-run. The best strategy when facing off against a ship that is hard to hit is attempting to lure them into a dense asteroid field where they cannot move easily and ramming them, as higher agility ships tend to lack mass and shields.

As this ship is relatively tanky, yet has a decent amount of firepower, it synergizes very well with both attack and defense pods. When equipped with three mining pods, this ship can mine exceptionally quickly. A Y-Defender sporting three defense pods is a force to be reckoned with.

The Y-Defender closely resembles the Y-Wing from the Star Wars Universe and is likely inspired by it.